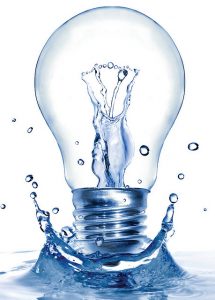 Energy production requires an abundant, predictable, and reliable source of water. Water, however, is already in short supply throughout much of the world and is getting scarcer in the United States as well.

The electric industry is second only to agriculture as the largest user of water in the United States. Electricity production from fossil fuels and nuclear energy requires 190,000 million gallons of water per day, accounting for 39% of all freshwater withdrawals in the nation, with 71% of that going to fossil-fuel electricity generation alone. Coal, the most abundant fossil fuel, currently accounts for 52% of US electricity generation, and each kWh generated from coal requires withdrawals of 25 gallons of water. That means US citizens may indirectly depend upon as much water turning on the lights and running appliances as they directly use taking showers and watering lawns.

Studies indicate that our growing population and economy will require 393,000 megawatts of new generating capacity (or 1,300 to 1,900 new power plants–more than one built each week) by the year 2020, putting further strain on the nation’s water resources. Several related factors bring into question whether a stable, affordable supply of water will exist to support the nation’s future electricity demands: population growth, non-consumptive needs, affordable energy, and shifts in water distribution.

While US population is expected to rise significantly, accessible freshwater supplies are not. Moreover, population movement and energy demand do not always track well with water availability. During the 1990’s in the US, the largest regional population growth (25%) occurred in one of the most water deficient regions, the mountain west. In addition, an increasing population will not only need more electricity but also more food, pushing the nation’s two largest water uses into potential competition for limited water resources.

Moreover, proposed restrictions on the use of water for power generation to protect fish and other aquatic organisms could result in increased costs of electricity or potential energy shortages. In addition, because the energy required for treatment and delivery of water accounts for as much as 80% of its cost, an insufficient supply of affordable energy will have a negative impact on the price and availability of water. Finally, the interdependency between the water and carbon cycles could lead to shifts in water distribution that are difficult to predict. That is, increases in electricity production and use may lead to higher levels of atmospheric carbon, which can impact the availability of water to electricity producers in certain regions.

What can be done? It has been estimated that water use can be reduced by more than 40% over business as usual by simply incorporating more conservation, efficiency, and renewable energy alternatives. That equates to 82 billion gallons of saved water or 252,000 acre-feet per year. Methods to save energy and water include:

Electricity and water are at the heart of the US economy and way of life. National defense, food production, human health, manufacturing, recreation, tourism, and the daily functioning of households all rely on a clean and affordable supply of one or both of them. Understanding the complex relationship between electricity and water, conserving both and developing technologies to keep that relationship healthy is an important key to a sustainable and secure future for the United States.