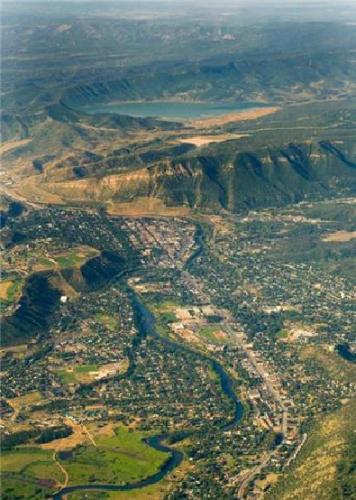 The Animas-La Plata Project (ALP), located in La Plata and Montezuma Counties in southwestern Colorado and in San Juan County in northwestern New Mexico, was authorized by the Colorado River Basin Project Act of September 30, 1968 (Public Law 84-485). It provided for a multi-purpose project primarily for irrigation and municipal and industrial uses.

Although scheduled for construction, in the early 1980s, discussions were initiated to achieve a negotiated settlement of water right claims of the Southern Ute Indian and Ute Mountain Ute Tribes in southwest Colorado. The Colorado Ute Tribes and other parties subsequently signed the Final Settlement Agreement on December 10, 1986. The Colorado Ute Indian Water Rights Settlement Act of 1988 (P.L. 100-585) (Settlement Act) provided language to implement the Final Settlement Agreement and supplemented the authorization of the ALP.

The Settlement Act allowed for future development of the region and at the same time protected existing water uses. In 1990, based on new biological information, and recognizing the potential of ALP to affect endangered species (the Colorado pikeminnow), the Fish and Wildlife Service(Service) issued a draft biological opinion with no reasonable and prudent alternatives. A final Biological Opinion was issued on October 25, 1991, containing a Reasonable and Prudent Alternative that would allow construction of several ALP features, but limited project depletions to 57,100 acre-feet while an endangered fish recovery program was conducted.

After Reclamation was authorized to initiate construction, several challenges were made regarding the completeness of the 1980 Final Environmental Statement and Reclamation subsequently rescinded the authorization for construction pending completion of a FSFES. Reclamation released the Draft Supplement for public review and comment in October 1992; the FSFES was completed and filed with EPA in April 1996. No record of decision was issued. In May 1995, reconsultation with the Service addressed new information and changes to the project. A Biological Opinion was issued by the Service in February 1996. This Biological Opinion contained a Reasonable and Prudent Alternative that would limit construction to only those project features which would initially result in an average annual water depletion of 57,100 acre feet.

Following the completion of the FSFES in 1996, a process was initiated to seek resolution of the continual controversy surrounding the Project, and to attempt to gain consensus on an alternative to the original project. The process concluded with the suggestion of two alternatives, a structural and nonstructural proposal. On August 11, 1998, the Secretary of the Interior presented an Administration Proposal to build a down-sized version of ALP to implement the Colorado Ute water rights settlement, eliminated all irrigation, and included a nonstructural element as part of the settlement implementation. A Final Supplemental EIS (FSEIS) was completed and filed with EPA on July 14, 2000 followed by a Record of Decision on September 25, 2000. On December 21, 2000, Public Law 106-554, the Colorado Ute Settlement Act Amendments of 2000 was enacted. Public Law 106-554 provides for the construction of a scaled down project: Ridges Basin Dam and Reservoir, Durango Pumping Plant, Ridges Basin Inlet conduit, with an average annual depletion of 57,100 acre-feet. The law also provides for the construction of a pipeline to deliver water for domestic use on the Navajo Nation at Shiprock, New Mexico.

The reservoir was declared full in the summer of 2011, but it was off limits until the City opened it to the public on April 1, 2018

Along with boating and swimming, fishing is one of the three primary recreational aspects of the lake. Colorado Parks and Wildlife has been stocking Lake Nighthorse with brown trout, rainbow trout and kokanee salmon since 2011, and added eight hundred 18-20″-long rainbow trout for fishing when the Reservoir opened to the public on Sunday, April 1, 2018

For more information on the history of this project click here.

For more information on Lake Nighthorse go to the website here. Season passes and 5-punch passes are available for purchase online and day passes may be purchased by credit card or exact cash at the entrance station.