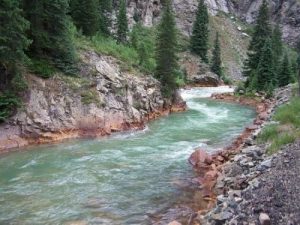 The Animas-La Plata Water Conservancy District (ALPWCD) was formed on March 18, 1981 under the Water Conservancy Act as set forth in C.R.S. 37-45-102. The territory included within the boundaries of the District are divided into three subdivisions with Directors appointed from each.

The general purpose of the District includes, but is not limited to: “acquire and appropriate waters of the Animas and La Plata rivers and their tributaries and other sources of water supply by means of ‘works’ as defined in the ‘Water Conservancy Act’ and to divert, store, transport, conserve and stabilize all of said supplies of water for domestic, irrigation, power, manufacturing and other beneficial uses within and for the territory to be included in the District.”

The project is managed by the ALP Operations, Maintenance and Replacement, Association, and includes representatives from the project participants. (ALPOM&R Association)

The City of Durango manages the recreational component of the project.

The ALPWCD is governed by a 15-member Board of Directors. The Board adopts an annual budget based upon a mill levy. Directors are appointed to four-year terms by the Division 7 Water Judge based their experience and background on water issues. The present Directors, their positions on the Board, and current terms of office are as follows:

Currently, the Board of Directors meets quarterly.

Dial by your location